It’s the name of the new cafe that’s yet to open at 2 Station Road in Rosanna.  From the signage and graphic design already up, it looks very promising.  I just hope they get the numbers given the lack of parking in that particular spot although lots of people walk past on their way to the train station.  I love the name – I was only still grumbling to Mr Rosanna last week that people seem to think culture is non-existent in the suburbs when there’s a big demand for more inner-city style cafes.  Just because I’ve moved a few kilometres out of the city doesn’t mean my sensibility and taste have changed… 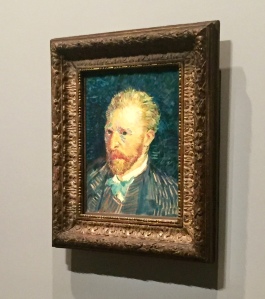 I made it to the Van Gogh exhibition for my birthday earlier this week and I think we spent more time queuing up to see the show, than in the exhibition space itself!  I’d bought tickets online but it was still a wait as there were lots of people like us wanting to see the show before it closes this weekend.  I will say, Van Gogh’s later work is beautiful – the way he captured light in his paintings is amazing.  I’m also looking forward to the House of Dior  fashion exhibition at the NGV which will open late August.

The boys took me to upmarket Japanese restaurant Sake beforehand for lunch so it was lovely to spend time sitting in the sun beside the Yarra River.  I’m glad there’s been a lot more development by the river – I could see across to Riverland Bar and know that there’s also ice skating on at the moment at River Rink at Fed Square.  After the exhibition, we actually made it to a late afternoon screening of Wonder Woman at the Westgarth Theatre in Northcote so we loaded up on coffees and hot chips beforehand at Barry.

I got some lovely small things from my family for my birthday including some T2 green tea (with spinach!) and a Frank Green environmental coffee cup designed in Australia.  I’ve not seen the War on Waste TV program but I know there are far too many disposable coffee cups and plastic straws thrown away.  I recently met a senior staff member from T2 who informed me of their ‘Three Cs’ branding – no coffee, no coke and no colour!  Apparently all the staff wear black.  I’m not sure I’d survive a day in there without coffee…

Mr R also bought me some beautiful tulips that I’ve been admiring all week on our bench top – tulips along with orchids and lilies (which unfortunately make me sneeze) are one of my favourite flowers.  I’ve always wanted some Art Deco glass tulips which are collectors items if you ever see them.  Have a great weekend – one more week until we are officially halfway through winter.

2 thoughts on “The Pioneer”