My feminism lecture at the State Library was completely sold out last night.  Interesting too in that we’d copped some criticism for having an all white female panel and while this is where we ended up, it wasn’t where we started.  Putting together a panel of speakers is both an art and a science and as a female ‘person of colour’ myself, gender and cultural diversity is something that is always at the forefront of my mind.  We struck out early on with a number of gay, male, indigenous and feminist people of colour as potential panelists, which isn’t something the general public is privy to.  I’ve been told by a highly credentialed pollster that people who come to public lectures are ‘self selecting’ anyway so there goes the argument for ‘diversity’… At any rate, we can’t nor do we try to be everything to every person – we can only ever show part of the conversation but not all.

We had a pretty powerful panel of women including external panelists musician Clare Bowditch (who’d ridden to the State Library on her bike!) and young feminist lawyer turned writer Bri Lee.  While we’ve got some way to go, it was interesting to hear Professor Jenny Graves‘ experience of sexism early on – behaviour that would get absolutely called out as unacceptable by young men and women now but was considered the norm in the 1960s and 70s.  Interesting too, Dr Beatrice Alba‘s evolutionary psychological experience and data that show even small or minor amounts of marginalism are damaging.  Clare Bowditch talked about her experience as a woman in both the music and media industries and as the mother of a 15 year old daughter, as well as her own experience as a ‘fat’ child growing up.  Bri Lee was an equally impressive speaker with an in-depth knowledge of the legal system revealing how antiquated it is and that class-ism and poverty are major issues alongside racism and sexism.  The lecture was livestreamed here and will soon be available as a Clever Conversations podcast on La Trobe University’s Soundcloud account. 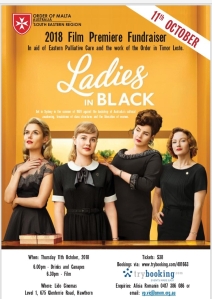 Speaking of women, my friend Alisia is coordinating a Ladies in Black film fundraiser at the Lido Cinema in Hawthorn next month if any of you are interested in attending.  Alisia is also doing the catering for the event to raise money for the Order of Malta Australia.  I saw the trailer for the Australian film when I watched Crazy Rich Asians the other week and I’m really looking forward to seeing it.

Despite unluckily being under the weather yet again, I did sit outside in the sun briefly yesterday and was happy to see all the new growth on the trees and shrubs in my back yard. Warmer weather is on its way and there are some Australian clothing and accessory brands that have recently caught my eye.  If you’re after new sunglasses, Pared Eyewear do some great styles and I also recently bought a pair of handmade Nelson Made sandals, which remind me a little of  the (much more expensive!) Ancient Greek Sandals Taygete Bow.  Lovely too some of the eco-reversible bathing suits by swimwear brand Baiia.com.au

Have a great weekend – I’m hoping the Melbourne Demons once again prevail over on the West Coast. Carn the Dees!