The La Trobe University Distinguished Alumni Awards were held on Monday evening and it was a long day and night for me. They are an annual event which were held in the city at Metropolis Events at Southgate which offered glittering night-time views of Melbourne and it was spectacular to get there late afternoon where we could see Arbory Afloat on the Yarra opposite us. 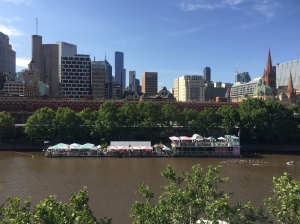 I got to mingle at the start of the evening talking to a number of high profile people I’d previously worked with when I managed the Bold Thinking Series including Virginia Trioli (who was one of the winners) and her partner Russell Skelton, Tony Walker, Geoff Walsh and Professor Jenny Graves AO plus a number of other leading academics and industry professionals with ties to La Trobe. Prior to the Awards, guests were also treated to a surprise performance by the Australian Ballet School – one of the University’s partners. 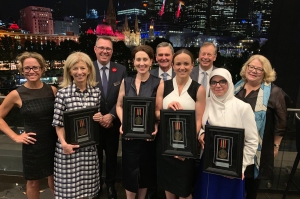 My wider team and La Trobe staff were given the beautiful floral table decorations at the end of the night and so I have stopped to smell the roses and enjoy the beauty of life this week, knowing that lift itself is a gift.

Speaking of flowers, the Bee Shed Launch Party is being held on Sunday at the Alphington Farmers Market and my friend and Bundoora Homestead Art Centre Director Ella Hinkley is involved with the Pollinator Alliance while tomorrow the Rosanna Primary Old School Fair, the Paella Sangria Churros night (fun!) at The Pioneer Cafe, the annual Watsonia craft fair and the Melbourne Ceramics Market in Collingwood (which local ceramic artist Lene Kuhl Jakobsen is part of) are all on – it’s a big day.

If the weather holds, the Malahang Festival is also on this Sunday in Heidelberg West as well as the Public Run Day at the Box Hill Miniature Railway. Strange to think our Spring weather has been so mild this year and my thoughts have been with our NSW neighbours up north battling those horrific bushfires this week. Stay cool…

It’s been a momentous few days and my Media & Communications team watched the Australian Bureau of Statistics live announcement on the postal vote and marriage equality gathered around a colleague’s computer yesterday – it was lovely to witness history and democracy in action and it’s one of the privileges of living in a more progressive country like ours at this particular point in time.  I do sometimes wonder what it would be like if more of us were exposed to diversity at a personal level through friends and family and how it would be played out in the larger community and society.  Love is love and it’s always been as simple as that for me however I know that people from different generations and religious/cultural backgrounds don’t see it the same way.

There is so much on this coming weekend around the place, we are spoilt for choice and I hope the sun comes out at some stage for those events being held outdoors like La Trobe’s soundvision live music and art event to farewell our 50th Anniversary year on Saturday.  I was treated to a visit by The Great Gizmo (above) in the kitchen at work today, who was very entertaining and there are a number of pretty funny selfies floating around the place from those of us who were accosted by him as we had tried to eat our lunch!

It’s a creative weekend in that the Nilllumbik Artists Open Studios is also on both days while on Saturday is the Arden Crescent Strawberry Fair in Rosanna, the Rosanna Primary School Fair and the Ivanhoe Primary Twilight Fair while in inner city Fitzroy, the annual Hispanic Fiesta in Johnston Street is on.

On Sunday, the Malahang Community Festival is on in West Heidelberg while cult classic film Dogs in Space featuring the late Michael Hutchence will also be screening at Heide Museum of Modern Art in Bulleen.  Speaking of dogs, Great Dane Furniture in collaboration with Oblica Fireplaces will also be holding a pop up sale with up to 75% off from 10am – 5 pm this Friday, Saturday and Sunday at 200 Argyle Street Fitzroy.