I was in the city for training on Friday (note to self: remember not to let your Myki card go into negative) getting there just on time only because I’d allowed enough time to catch the earlier train, which was the smart move as twice now I’ve been caught out either due to the just on time train being cancelled or in my case on Friday, having an invalid Myki card and needing to top up thus missing the earlier train. Aargh! At least I got there early enough to (just) get myself a coffee…

La Trobe University actually allowed staff and students to attend the global climate strike on Friday given sustainability feeds into our cultural qualities: connected, innovative, accountable and care – all of which are included in our 2018 – 2022 Strategic Plan. Interesting too in that one of the Bold Thinking Series ideas which we never progressed but had a meeting with academic Lawrie Zion about (who wrote The Weather Obsession) was how people will believe meteorologists (scientists) when they talk about the weather but not when they talk about climate change. It never got up but is food for thought.

I had meant to post earlier today as the Alphington Farmers Market (where you can find the La Trobe Wildlife Sanctuary) was on from 9am until 1pm in Wingrove Street Alphington (where you’ll also find relatively new Greek cake shop Nikos Fairfield) and the Melbourne Farmers Market had also allowed its staff to attend the climate strike given this year’s farm production is forecast to be at its lowest in four years with drought a serious contributing factor.

I’ve been reminded of cakes and sweets as one of my Italian work colleagues has let me know about the cannoli carts available for hire from That’s Amore Cheese in Thomastown and the opening of the Pascoe Vale outpost of Augustus Gelatery. I think cannoli and mini gelati both make great wedding and other party desserts. A reminder too that the Italian Film Festival is currently on at Palace Cinemas until 16 October. 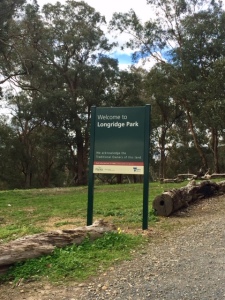 Finally, I got to check out Longridge Camp (photos above and below) in Warrandyte today as per my previous post on local/weekend camping and it is definitely a hidden secret in Melbourne’s north-east set amongst the rolling hills off a dirt road (and across the river from the other hidden secret that is the Laughing Waters swimming hole) which can be hired for exclusive use for around $175 per night ie. no other campers onsite! There’s a BBQ, toilet and shower facilities and fire wood is also supplied but it is unpowered. If you’re not wanting to pitch a tent you can also hire a campervan for around $110 so it makes for a great introduction to first time campers and groups of up to 40 people who want their own space. It is a nature lover’s paradise and in light of the climate strike, I’ll leave you with the famous American Indian quote to ponder on.

When the last tree is cut, the last fish is caught, and the last river is polluted; when to breathe the air is sickening, you will realise, too late, that wealth is not in bank accounts and that you can’t eat money.