Australian jazz musician Vince Jones was often on high rotation on our vinyl turntable when Mr Rosanna and I lived in our little terrace house in Brunswick before married life and children arrived. We’d spend lazy Saturday mornings sleeping in, buying fresh bread and cannoli from the local Italian bakery in East Brunswick where Mr R would also often pop his head into our friend Marsden’s second hand record store Muscle Shoals which is still there today.

While Mr R has previously seen Vince Jones play live, I never have but got the opportunity last night at the Melbourne Recital Centre as part of this week’s Melbourne Jazz Festival. Instead of being in the back row up the top when we saw Olafur Arnalds last year, this time I’d booked early and we were in prime position in the second row front and centre. Vince Jones has had a long and illustrious musical career as well as an interesting life spent living in the United States along with a 10-year musical residency here in Fitzroy, Melbourne.

Vince’s show last night, accompanied by his 7 piece band, where he played songs that reflected his personal journey in life (including songs by Doris Day and Sam Cooke) was fascinating. I hadn’t realised the political and social commentary that much of his music reflects, nor his activist background accompanying Peter Garrett to Kakadu to protest against uranium mining with local Indigenous people in his younger years. His very humorous and slightly wry observations and words last night, often sung rather than spoken, made for a very entertaining night. He’s now become an elder statesman of the jazz world, similar to Jimmy Barnes in the rock world. 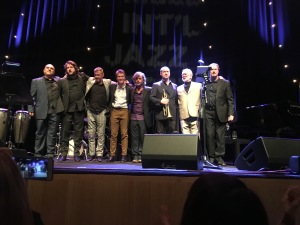 It was a challenge getting to the city on time last night for the start of the show. After work, I’d rushed home to feed the dog, get ready and pack up before carting children off to babysitters and driving to Clifton Hill station where I promptly jumped on a train to the city before meeting Mr R at Italian Bar and Cantina Fatto at the Arts Centre. We wolfed down a pizza and bowl of chips before sprinting to the Melbourne Recital Centre, which celebrates 10 years this year, arriving just in time to take our seats before the show but still having to excuse ourselves to all the patrons who’d arrived early and taken their seats. Luckily all those jazz cats are a forgiving bunch! Enjoy your long weekend. 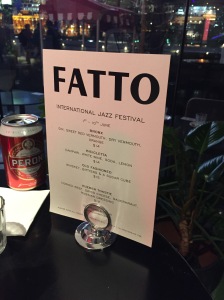